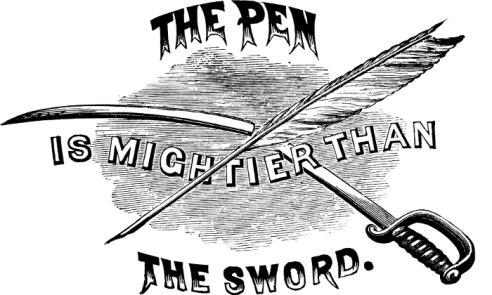 I don’t support insult of any religion as well as I support freedom of media and free journalism but I don’t support killing someone if someone else’s freedom hurts you. These are the same scholars and cartoonists who introduced religious freedom, freedom of speech and freedom of expression, they are the reason we are living freely in this world today. Whenever anything happens anywhere in the world Pakistanis are the first and the only ones to protest and support the terrorists but they never see the poor condition of minorities in their own country. They don’t allow anyone to insult their prophet but every Friday illiterate mullahs give derogatory remarks against Jesus Christ, Christianity and call Christians an infidel and untouchables on loud speakers. Freedom of speech means if Christian believe that Jesus is Son of God, no one has right to stop or persecute us for what we believe, its our faith and we have right to practice our religion freely. Pakistani syllabus is full of hate, negativity and insult for Christianity which is as same as Charlie’s cartoons. This syllabus is a blasphemous syllabus for Christians. Pakistan need to stop discriminating against Christianity only than the world will support Pakistan. One cannot insult other religions and expect respect for their own religion. Muslims think that freedom of expression and religion is for them only. All Pakistani parliamentarians who are supporting and recording protest against the cartoons should be ashamed of their act because they are the ones who can abolish the black blasphemy law from Pakistan but they don’t do it because they don’t want Christians to get freedom in Pakistan. All Islamic religious political parties of Pakistan are the terrorist parties and they should be arrested and trialed in military courts for giving a call of protest because their purpose is to promote hate against Christians and other minorities of Pakistan.

It was a funeral ceremony in honor of two murderers. In Pakistan on Tuesday, that meant flowers, laudatory speeches and posters honoring the killers’ brave “sacrifice.”

The gathering was billed as a memorial service to honor the al-Qaeda-linked brothers who killed 12 people at the offices of Charlie Hebdo newspaper in Paris last week. Two days after that attack, French security forces killed both after a daylong standoff on the outskirts of the city.

In the northwest Pakistani city of Peshawar, a few religious and political activists decided that Cherif and Said Kouachi needed a proper sendoff — one suitable for two men the activists deemed religious warriors who sacrificed themselves for their Islamic faith.

Neither brother is known to have any connection to Pakistan nor to have ever traveled here. But organizers said the ceremony was a show of support for their defense of the honor of the prophet Muhammad, whom Charlie Hebdo had frequently lampooned over the years. French authorities suspect the gunmen — who were heard shouting “We have avenged the prophet” after the attack — targeted the newspaper because of those depictions.

“We were prompted by our faith to organize this funeral for those two martyred brothers,” said Pir Mohammad Chishti, a religious scholar who runs a seminary in Peshawar. “I only know one thing: They killed the ones responsible for blasphemous against our beloved prophet Mohammad.”

The gathering in Peshawar followed similar protest in neighboring Afghanistan on Friday. In Afghanistan’s southern Uruzgan province, hundreds of demonstrators streamed out of Friday prayers and declared the two brothers “heroes,” according to Reuters.

In both Afghanistan and Pakistan, those who gathered represent the conservative fringes of their countries’ political debate, but they’re not necessarily outliers on this topic. Their outcry reflects the deep-rooted passion that many Muslims feel about depictions of the prophet, which Islamic tradition forbids.

It is also something Pakistan forbids. Under the country’s strict anti-blasphemy law – which calls for capital punishment in some cases – the cartoonists at Charlie Hebdo magazine very well could have been criminally charged had they ever stepped in Pakistan. The law, which has been widely condemned in the West, can be triggered if someone is even suspected of demeaning the prophet.

In the aftermath of the shooting, lawmakers in some countries that have blasphemy statues, including Canada and Ireland, have considered ditching the law. There has been no such discussion in Pakistan, where 38 people are serving life sentences or are on death row after being accused of blasphemy, according to Knox Thames, director of policy and research at the U.S. Commission on International Religious Freedom.