The picture I have posted is the picture of my previous office in Islamabad, Pakistan. The date is also mentioned, this was the time when I was in prison due to false blasphemy case under section 295C and these kinds of slogan were chalked on the walls of my office by the extremists. This is the slogan of every Pakistani Muslim over there. This was the tenure of Pakistan People’s Party (PPP) which is considered as a liberal party of Pakistan. I laugh at their so called liberalism.

As I have observed and according to my personal experience, every government of Pakistan is extremist but Nawaz Sharif whom I named as Nazi Sharif during his every tenure plays a role as a Nazi for Christians of Pakistan. Nazi Sharif himself is a product of madrassas who always support anti-Christian policies and organisations in Pakistan. He always appoints anti-Christian ministers in his cabinet that can follow his agenda of Christian Genocide in Pakistan. I am surprised to know that how they are deceiving the world.

The government of Pakistan including all political parties is participating in Christian Genocide in Pakistan. According to above picture of my office, they are focusing on real holocaust that is the Christian Genocide by burning them alive, killing them in prisons and police stations and burning Christian enclaves by falsely accusing them of insulting, burning and tearing a page or pages of Koran. But the question is, is one page of Koran more important than a human life?

Its time for the world to declare Pakistan as a Terrorist Country and a Threat to Global Peace and Humanity.

This video was made when Hector Aleem Chairman Peace Worldwide was jailed for 4 years just because he raised voice against the destruction of Church. During these 4 years he was tortured in the worst way possible. Pakistani Government does not like anyone who raises voice for Pakistani Christians. Pakistan is No.1 Country in the world in terms of Human Right Violations. Please pray for Christians of Pakistan. 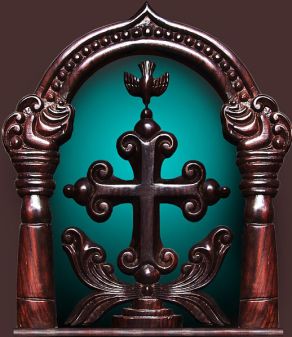 Pakistani Christians are indigenous people of Pakistan. We are not immigrants from some other area. We have been living here for centuries. Pakistani Muslims migrated from Afghanistan, Iran, Iraq, Arab etc. They cannot expel us from this land, instead we will expel them and will reclaim our land for good. This land belongs to us, not them. Pakistan talks about freedom of Kashmir but cannot understand that they have illegally occupied our land. They are the biggest land grabbers but we will reclaim our land.

Among its proudest displays, the Cathedral of Lahore exhibits a small cross in a glass case. Known as the Taxila Cross, it was found in 1935 just outside the ruins of Sirkap, the second city of Taxila, and is commonly believed to signify that Christianity had taken root in the subcontinent shortly after the crucifixion of Christ. The ‘proof’ supporting this theory is a manuscript titled The Acts of St Thomas that was discovered in 1822 in Syria. According to this document, St Thomas having been assigned by Jesus to teach the gospel in India (now it is the part of Pakistan), arrived by boat at the seaside capital of King Gondophares. Working miracles, he successfully converted the king and all his subjects to Christianity

Now, whenever the Acts was compiled and even in 1822 when it surfaced in Syria, Taxila had not yet been discovered. Only serious historians well-acquainted with the history of Alexander knew that it lay somewhere to the east of the Indus River in Punjab. When the cross was discovered in 1935, Cuthbert King the British deputy commissioner of Rawalpindi (twin city of Islamabad, Pakistan), evidently knew of The Acts of St Thomas and seized upon this find as ‘proof’ of the existence of Christianity in Punjab as early as the 1st century CE. His belief was strengthened by the fact that newly-excavated Sirkap did indeed date back to the 1st century. Along with the cross, they also found some coins marked with the cross.

Pakistani Muslims always hurt the religious feelings of others. Actually, Pakistan is an epicenter of terrorism and hub of evil thoughts. Then they claim on their paki media that all religions are enjoying freedom and that we respect all religions (which is not true). Now here is another way for Pakistani Muslims to express their hate towards Christians. There are shoes being sold in Pakistan which has Holy Cross and British Flag printed on them. For those who don’t know, United Kingdom is officially a Christian country and the flag of UK has four Crosses on it. These shoes are being manufactured and sold in Pakistan and people are buying these shoes with joy with a thinking that they are crushing Christianity under their shoes. Center for Legal Aid Assistance and Settlement (CLAAS) took action on it. Chief of CLAAS Mr. Joseph Francis and his colleagues have been successful in registering a case. On October 09, 2014 FIR # 959/14 offence under section 295-C has been registered against unknown persons in the Saddar police station Cantt Lahore. Now this FIR has been registered against unknown persons, what will happen after that? who is unknown? will the police even bother to arrest someone? The answer is no, nothing will happen and no one will be arrested because of biased police and discriminatory system of Pakistan. The shopkeeper who was caught red handed, the place he bought shoes from and the owner of the factory in which the shoes are being produced, all of them should be arrested and punished. I have been in jail for 4 years due to a false blasphemy case (A crime I never committed), they arrested me as fast as they could but police did not arrest anyone in this case. I really appreciate what Mr. Joseph Francis did for our faith. May God bless him. Now what should we all do in reaction? Should we also make shoes with the flag of Pakistan and face of Quaid-e-Azam (The founder of Pakistan)???

A Christian couple, 35-year-old Shahzad Masih and his 31-year-old wife Shama Bibi, were burned to death Tuesday morning by a Muslim mob in the south of Lahore (Punjab province), accused of committing blasphemy for allegedly burning pages of the Qur’an.
The two, who worked in a clay-baking factory, were kidnapped on November 2 and held hostage for two days inside the factory. On Tuesday morning at 7:00 a.m. the two were beaten and then pushed into the brick kiln. Shama was pregnant.
The supposed blasphemy occurred upon the recent death of the Shahzad’s father. Two days ago, Shama was cleaning her father-in-law’s house, and in the process burned some personal items and papers that seemed useless. A Muslim man saw what she was doing and spread the word in the surrounding villages that the papers she burned included pages of the Koran. A mob of over 100 people formed, and took the couple hostage, finally executing them Tuesday.
Emaneul Sarfraz, a relative of the deceased couple, offered a slightly different version of the events. According to Sarfraz, his cousin Shahzad and his wife Shama had been working in the kiln of Muhammad Yousuf Gujjar.
“The couple along with their four children wanted to leave the kiln as Yousuf was not paying their remuneration. He demanded Rs 500,000 (Approximately 5,000 US Dollars) from them, if they wanted to quit.”
“Two days ago, after an exchange of words Yousuf locked the couple along with their children in a room,” Sarfraz said. After two local mosques announced the alleged blasphemy, “a large number of Muslims led by area clerics reached the kiln and dragged the couple out of the room after breaking into it. They first tortured them and then threw them in the kiln,” he said.
According to another report, as the Christian couple was burning and protesting their innocence, the mob was shouting “Allah hu Akbar,” “death to blasphemers,” and “kill the infidel Christians,” at which Christian residents nearby fled from their homes to safety.
The same report claims that it was the owner of the brick Kiln factory, Yousaf Gujjar, and his manager who instigated Muslims of nearby villages to punish Shahzad and Shama after a Muslim employee complained of them burning of pages of the Qur’an.
The police, alerted by other Christians, came to the scene, substantiated the death and brought in 35 people for questioning. A local police station official Bin-Yameen confirmed that “a mob attacked a Christian couple after accusing them of desecration of the holy Quran and later burnt their bodies at a brick kiln where they worked.

Hector Aleem’s speech in “National Conference on the protection of Minorities in Pakistan: Issues, Challenges and way forward.” with MNA Mr. Akram Gill and Senator Ms. Roshan Baruja etc.
Those who claim that 5% quota of government jobs for minorities was announced by a Christian Federal Minister during the tenure of PPP (2008-2013), following is the proof that Hector Aleem demanded for the 5% quota of government jobs for minorities during the Musharraf tenure and before that. This is the result of his struggle. Following is the link of the report on the conference in which the entire speech of Hector Aleem can be read (see page 17 and 18 of this report).
Here is the Link: Hector Aleem’s Speech (Page 17 and 18) 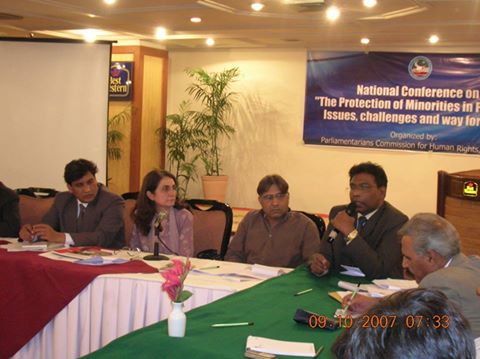 The main issue was the destruction and burning of Church and of desecrating Holy Bible and Holy Cross by the CDA (Capital Development Authority) and WASA (Water and Sanitation Agency) officials. False stories were made about Hector Aleem Chairman Peace Worldwide and they also lodged fake cases against him. Like Malala Yousafzai was accused of making false stories after she was attacked by Taliban, same thing happened to Mr. Hector Aleem. An article is being attached here and everyone can read that 500 government employees were prepared to attack the Church and worshipers. These 500 people were in fact terrorists of Sunni-Tehreek (A terrorist organization operating in Pakistan). The real story is only about the Church, Holy Cross and Holy Bible which were burnt and destroyed. And the worshipers who were brutally tortured.

Accusing a person of crimes he never committed and registering false cases is a trick of Pakistani government so that focus from real issues can be diverted. This is a common practice in Pakistan. You can read the whole article here

Stop the Persecution of Christians
Create a free website or blog at WordPress.com.